It will take place at Daily’s Place in Jacksonville, Florida and will feature the AEW in-ring debut of WWE and Impact Wrestling Hall of Famer Sting.

Viewers in the UK can watch AEW Revolution via Fite TV, while fans in the United States can get it through either B/R Live or traditional pay-per-view.

Eight matches have been confirmed for the PPV so far, including:

Kenny Omega versus Jon Moxley in an exploding barbed wire match for the AEW championship.

The Young Bucks versus Chris Jericho and MJF for the AEW tag team championship.

Hikaru Shida versus Ryo Mizunami for the AEW women’s championship.

Face Of The Revolution Ladder Match.

Miro and Kib Sabian versus Orange Cassidy and Chuck Taylor.

Thunder Rosa and Riho will face Britt Baker and Reba on the Buy-In show, which is live on AEW’s YouTube channel from 12.30am GMT / 7.30pm ET. All Elite Wrestling will host their second Double or Nothing pay-per-view this evening. The event was originally scheduled to take place at the MGM Grand Garden Arena in Paradise, Nevada. The venue, however, cancelled all events up through May 31… All Elite Wrestling will host their Full Gear pay-per-view event this Saturday (9th November) at the Royal Farms Arena in Baltimore, Maryland. The event will be shown live on ITV Box Office for viewers in the UK, and streaming live… 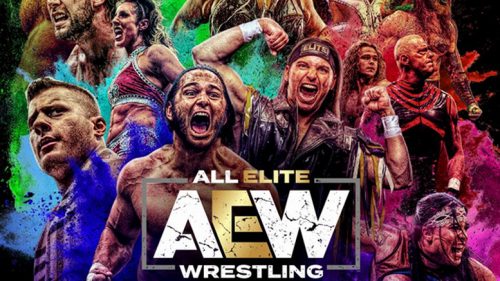 ITV and AEW have announced ‘AEW: Dynamite’ will be shown on ITV and ITV4 in the UK. The show, which launches on Wednesday 2nd October, will be available via the ITV Hub from 7.00pm on Thursdays; On Fridays from 11.20pm…