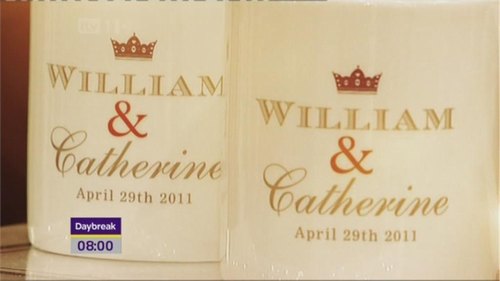 Prince William and Catherine Middleton will get married at Westminster Abbey on Friday April 29, and the british television media will be on hand to cover the royal event.

Huw Edwards will lead the BBC Coverage from Canada Gate, opposite Buckingham Palace. Sophie Raworth will be presenting from the roof of Methodist Central Hall, opposite Westminster Abbey, interviewing wedding guests and Fiona Bruce will be based at the hotel where Kate Middleton will be staying before the wedding.

Also reporting for BBC News will be Fearne Cotton outside Buckingham Palace, Chris Hollins on the Mall, Jake Humphrey at the City of Lincoln Lancaster bomber, Edith Bowman, Alex Jones and Anita Rani.

ITV presenter, Phillip Schofield will team up with Julie Etchingham to front ITV’s coverage. They’ll anchor from a studio opposite Buckingham Palace.

Mark Austin and Geraint Vincent will be located on The Mall. Mary Nightingale live from Westminster Abbey.

Nina Hossain will join the celebrations at a live screening in Hyde Park with Matt Smith in St Andrews and Andrea Benfield in Anglesey.

James Mates will lead live commentary of events inside the Abbey and Tom Bradby will give an insider’s insight into the life of William and Kate after their marriage.

Daybreak will start ITV’s coverage with Adrian Chiles and Christine Bleakley presenting from a studio at London’s Canada Gate.

Eamonn Holmes will host Sky News’ coverage of the Wedding from a studio opposite Buckingham Palace – he’ll be joined by Royal Correspondent, Sarah Hughes.

The day’s coverage will start at 6am with Dermot Murnaghan.

Kay Burley will be live from Westminster Abbey with Alastair Bruce.

Anna Botting will be hosting a live screening event on the Southbank.

And Sky presenters and correspondents will line the route talking to the crowds and will be live in Anglesey and in St Andrews.

Matt Barbet will lead Channel 5’s coverage. Emma Crosby will be in Catherine’s hometown of Bucklebury.