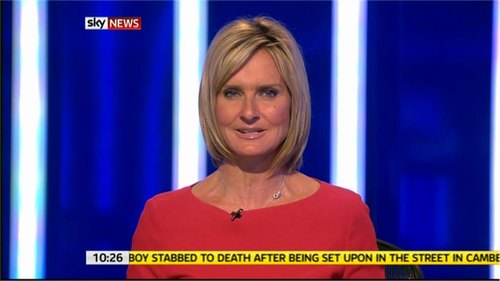 The former Olympian revealed to her 34,000 Twitter followers that doctors had broken the news to her on Christmas Eve.

Jacquie tweeted: “Been neglecting my twitter had a bit of a wobbly time of it – diagnosed with Breast Cancer on Xmas Eve – all positive thoughts welcome !!”

Friends and colleagues have tweeted their support for Jacquie, including Kay Burley:

Just been chatting with @SkyJacquie who has tweeted that on Xmas Eve she was diagnosed with wretched breast cancer. Pls send her your love.

A big hug for @SkyJacquie who was diagnosed with breast cancer just before xmas – please send lots of love her way. Thinking of you Jacqs xx

Jacquie, who joined Sky in 1992, represented Great Britain in rhythmic gymnastics at the 1984 Olympic Games in Los Angeles.