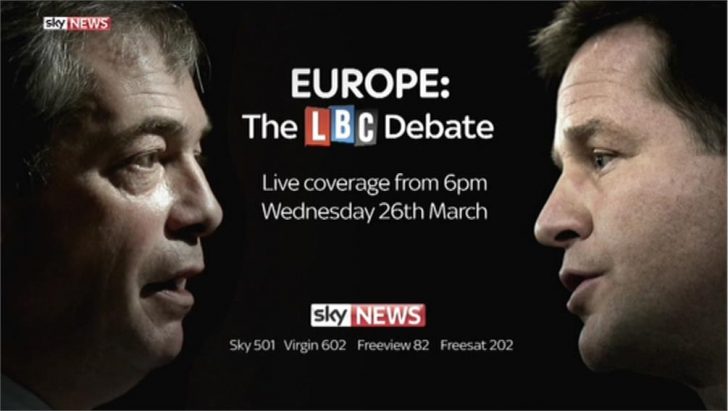 Sky News has confirmed it will broadcast live coverage of LBC’s ‘Clegg vs Farage In Or Out Of The EU?’ debate on Wednesday 26th March.

Kay Burley will present live coverage before and after the debate, where Liberal Democrats leader, Nick Clegg, goes head-to-head at 7pm with UKIP’s leader, Nigel Farage, over Britain’s future in Europe.

Kay will present live from the debate’s central London location with Political Editor Adam Boulton and a panel of guests in Sky News’ Westminster studio. Analysis will be provided from Deputy Political Editor, Joey Jones.

Sky News will also carry the BBC’s debate between the two leaders the following week on Wednesday 2nd April.

John Ryley, Head of Sky News, said: “Sky News believes strongly that leaders’ debates should be seen by the widest possible audience. We commend LBC and the BBC for making their debates freely available to all other broadcasters.”