Out and Proud: Where Brexit Leaves Us Now – Sky News Special 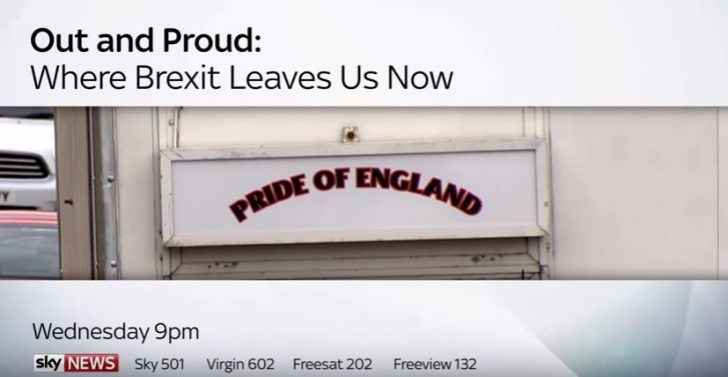 Sky News will broadcast a special documentary this evening taking an in-depth look at the reasons behind the decision to leave the EU.

The hour-long programme – Out and Proud: Where Brexit Leaves Us Now – will air on Sky News from 9pm and is fronted by Political Editor, Faisal Islam.

Sky spent a week in Sunderland and its surrounding areas seeking out what actually lay behind the Leave vote, and exploring the mandate it has delivered.

On his travels, Faisal spent time speaking with fishermen hoping the shipyards and coal mines will reopen, pensioners at the air show expecting £350m a week for the NHS, and to Leave voters who have never voted in general elections and will probably never vote again.

“To better understand where we are going, we have to first unpick how we came to this. Only by asking people why they voted Leave, can we establish where the Brexit mandate is going to take the country,” said Sky News’ Political Editor Faisal Islam.

“Theresa May promises that “Brexit means Brexit”. But it does matter what the people who delivered the vote, Labour Tory and non-voter actually believe it means.”

Key players from both the Leave and Remain camps including Nigel Farage, Sadiq Khan, Jeremy Corbyn, and Theresa Villiers also speak to Faisal about how the Leave vote was won.