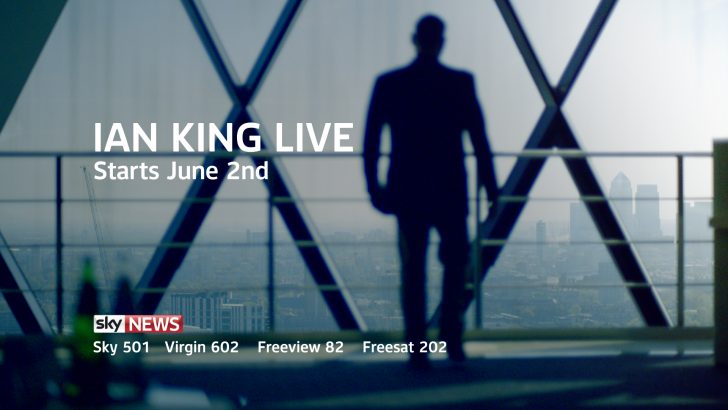 The half hour programme will be broadcast live every Monday to Thursday at 6.30pm from the Sky News City studio in The Gherkin from Monday 2nd June 2014.

The show will be hosted by new Business Presenter, Ian King. Ian will put business leaders and policy makers through their paces and help Sky News viewers understand how the major corporate decisions made in The City affect their lives.

John Ryley, Head of Sky News, said: “The business agenda is one that affects each and every one of us, and Ian King Live will really help people understand why the decisions that get made every day in the business world, have an impact on the lives they lead. Ian’s reputation as a journalist is second to none, and I know his show will become a must view programme in our schedule.”

Ian has been at the forefront of financial journalism for the last twenty years, starting his reporting career at The Daily Telegraph. Since then he has worked at The Guardian and The Mail on Sunday before becoming Business Editor of The Sun in 2000. Whilst there he was named Business Journalist of the Year at the UK Press Awards and Business Journalist of the Year at the London Press Club Awards. More recently he was Business & City Editor of The Times, where he worked for nearly six years, running a section that won numerous awards under his leadership.