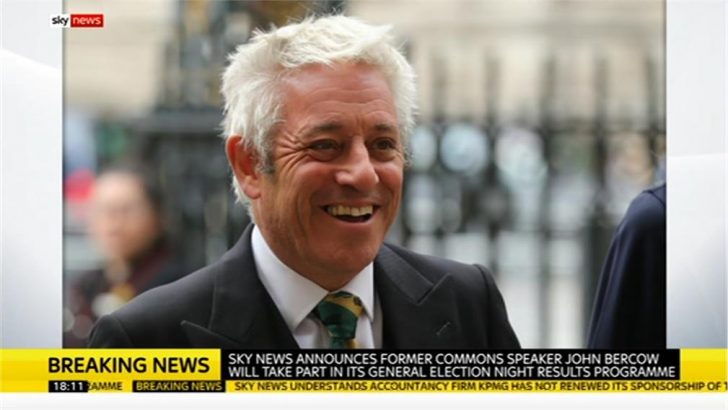 John Bercow is to join Sky News for its election night coverage on 12th December 2019.

The former House of Commons Speaker, who recently stepped down after 10 years in the role, will join host Dermot Murnaghan to give his take on events as the battle for Downing Street unfolds.

“It promises to be a night of political frenzy with the very future of the United Kingdom at stake,” said John Ryley, Head of Sky News.

“I’m confident this will be Sky News’ biggest, boldest election night programme, covering every twist and turn of the night, with explanation and analysis for all audiences.

“Sky News will have all the bases covered to analyse the results as they start to be reported, with the exit poll released at 10pm giving the first indication towards the possible outcome.

“We’re delighted to be welcoming John Bercow to our general election coverage. House of Commons Speaker for 10 years, John will bring his own authority, and no little wit to a night of high drama.”

Sky’s main election programme will start at 9pm, followed by the release of the broadcasters’ exit poll at 10pm.

Economics editor Ed Conway will use the very latest graphics to show viewers the story in the clearest and most concise way.

Presenter Anna Botting will be with Prime Minister Boris Johnson, Sophy Ridge will be with Labour leader Jeremy Corbyn, Niall Paterson with Lib Dem leader Jo Swinson, while Gillian Joseph in Newcastle and Sarah-Jane Mee in Sunderland will vie for the honour of the first constituency to declare a result.

A special edition of Kay Burley@Breakfast will come from Westminster from 6am until 9am the morning after polling day, while editor at Large Adam Boulton takes over the reins for a day of more drama as whoever has won sets up their government.