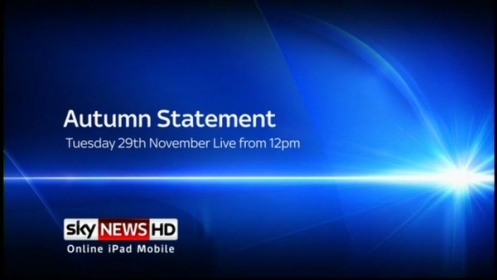 The Chancellor of the Exchequer, George Osborne, will today deliver his fifth and final autumn statement before the 2015 General Election.

The statement provides an update on the government’s plans for the economy based on the latest forecasts from the Office for Budget Responsibility.

The statement, along with Prime Minister’s Questions, will be broadcast live on BBC Two, BBC News Channel and Sky News.

The chancellor will get to his feet in the House of Commons at 12.30pm

The BBC’s coverage begins at 11.30am, where Andrew Neil is joined in the studio by Nick Robinson, Robert Peston and Stephanie McGovern, with political reaction from Westminster and around the country.

Sky News’ main coverage starts at 11am with Dermot Murnaghan, Faisal Islam, Ed Conway and Ian King on hand to steer viewers through the key points.

Viewers can also watch PMQs and the statement live online via the BBC iPlayer and on SkyNews.com

Highlights and the keys points of today’s statement will be shown on the afternoon and evening news bulletins: BBC One 1pm, 6pm and 10pm; ITV News 1.30pm, 6.30pm and 10pm; Channel 4 7pm; and Five News 5pm.